An integrated Index of Lethality for full auto weapons (BF4)

This thread comes from the discussion with @Miffyli (creative discussion!!!) about which is the parameter to describe a dimension in a weapon (Thread Multidimensional Analysis). This is just an exercise to integrate individual parameters of weapons in an index and doesn’t pretend to be THE RANKING of weapons because those rankings depend strongly on the set initial conditions.

Philosophical principle: A gun is better than another if it wins in an individual engagement (is faster delivering the damage>100), and the measure of that is the probability of delivering it.

The case analyzed is: full auto weapons (55 weapons), ADS, naked gun (or fixed attachements such as PDWs) and perfect aiming. Other strategies (microbursts, auto or manual), recoil correction or different points of aiming for each weapon to optimize the bursts are not considered. Time to ADS is not considered.

Weapon Features are taken from @Veritable table (Thanks!!!), filling some gaps (Base values of Hrec and Spread). When discrepancies are found with Symthic stats, these values are taken (mainly AS VAL and GROZA).

1st step: Generate 2,000 bursts of 10 rounds for every weapon in 10 m intervals up to 100 m (these weapons haven´t significant results further than 50 m). Evaluate if each bullet hits and where (stom., chest, head or missed). Register the damage.

This is not new, because it follows in the footsteps of Hitrater, Simplot and Plotic.

2nd step: Classified by distance, register on each individual burst: Total Damage, Number of Bursts that produces DMG > 100, Number of Bullets that hits the target, Number of Shots (not bullets, because some of them may be missed) that causes DMG > 100, Time to Kill (where DMG > 100) and many other parameters. This analysis within the burst is new.

This TTK is different than common TTK in Symthic because it takes into account missed bullets and time to reach the target (velocity of bullet). In fact it is:

Note that the first shot is done at Time=0 and I compute total shots to kill instead of bullets on target to kill. An analysis of sensibility shows that Vbullet has
importance at range to change the TTK.

3rd step: Get the statistical parameters for the above values for each set of 2000 bursts at a given distance (Mean, Standard Devt., quartiles, max., min, etcÂ
).

The analysis shows that the relevant parameters are:

We have the following graphs.

Mean DAMAGE in the bursts / DISTANCE: 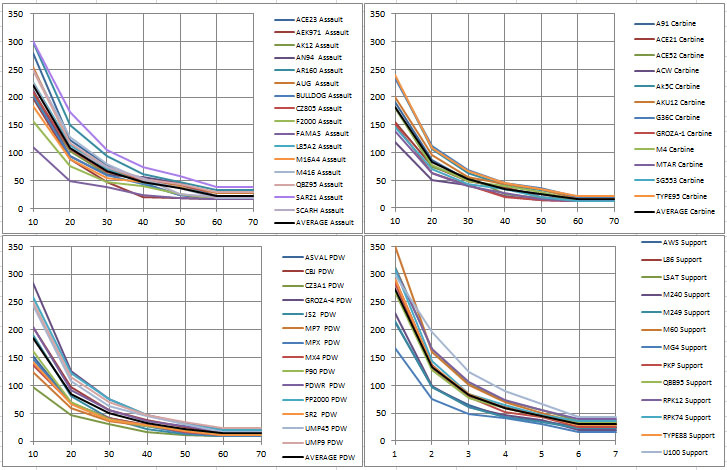 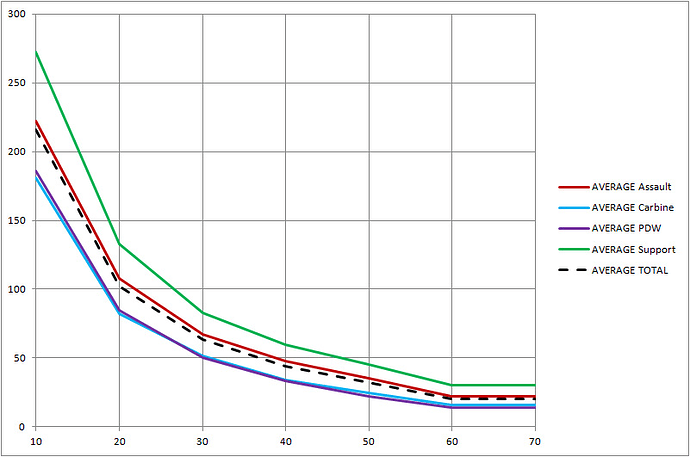 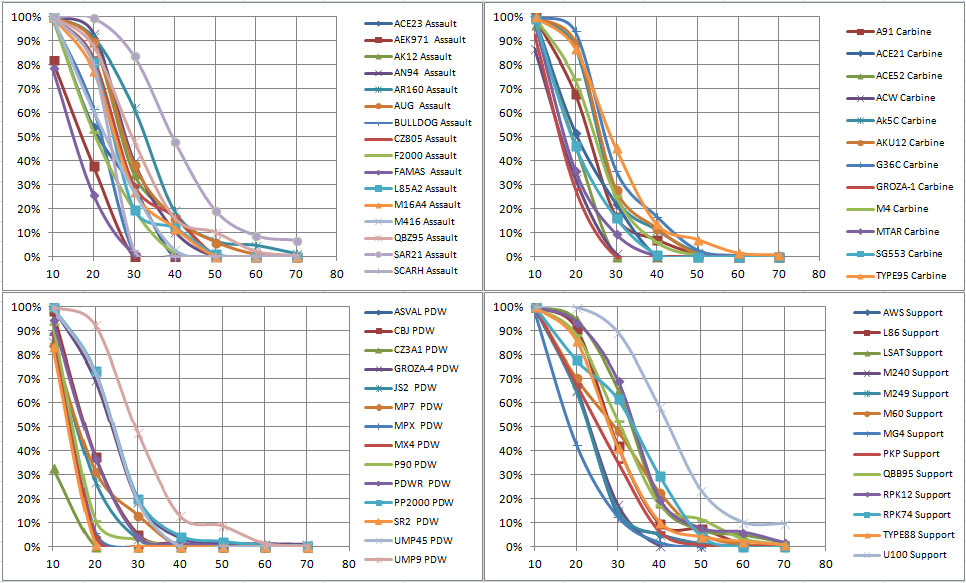 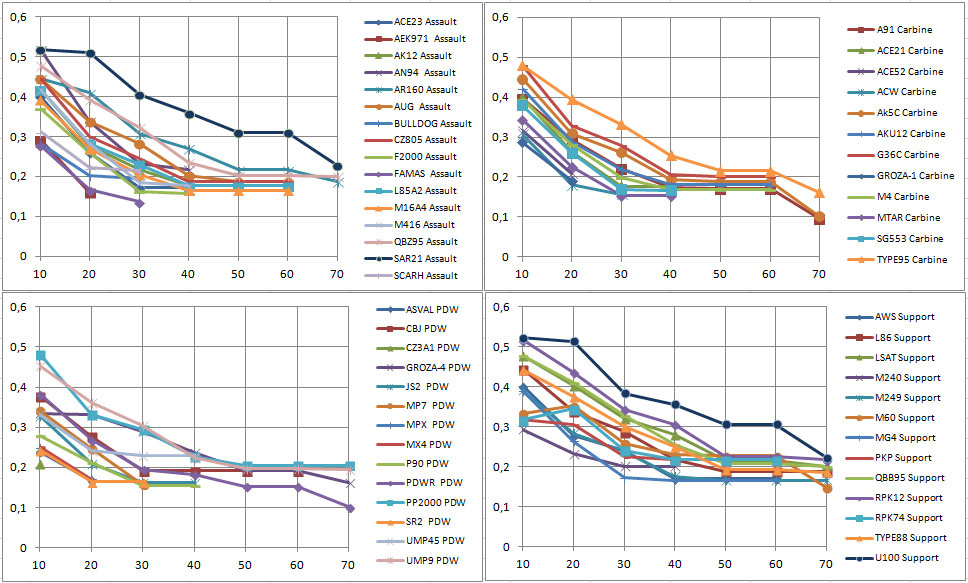 4th step: Compare the weapons in pairs. That is, huge 55x55 matrices at each distance, with the probability to win.

The algorithm is explained here because it is a complicated problem.

Now we have the integrated probability to win for each weapon against other ones. Here you see the results for AR: 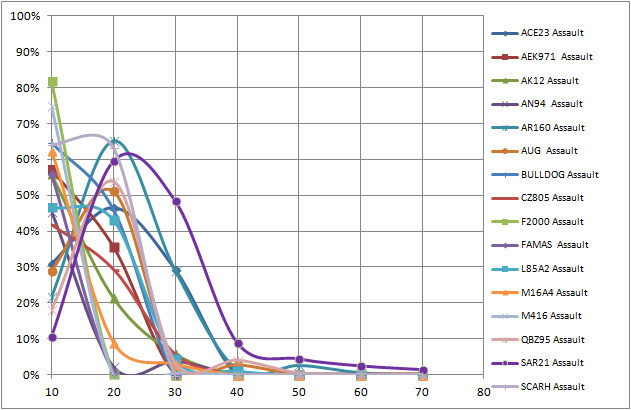 The “waves” are due to curved option.

Note that it shows there are good weapons for CBQ (F2000 or ACE23) and good ones for long range (SAR-21). The results are fully consistent.

5th step: Are all distances of combat equally probable? We know they are not. We have the @Miffyli curves of probabilities of engagement. We weight the results for each distance with that probability, we add the probabilities weighted, we convert that to the scale 0-10 … and FINALLY!!! we have THE INTEGRATED INDEX OF LETHALITY (sorry for the name!!!:-)) that integrates ROF, RECOIL, SPREAD, DAMAGE (D) and BULLET VELOCITY (no weighted values are shown to compare the effect of weighting.Scale 0-10).

Next steps: Which are the probability that you could produce that results?. It depends on the availability of ammo, which depends on the size of the magazine and reload time … but sorry, I’m exhausted now :-).