I calculated the effect of a single shot with BF1 shotguns that use buckshots.

The methodology is the one that was exposed in the thread: Shotgun Damage -outdated- (BF4)

Incidentally, the shotguns need a lower aim than the rest of the weapons for an optimal result (about 10 cm below) because the head has a multiplier 1 and headshots do not give advantage. 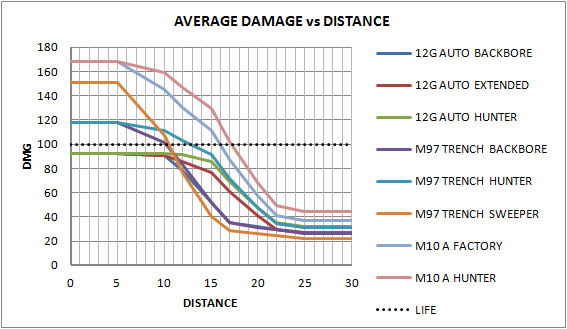 The average damage only shows one point of the possible damage curve at a distance because different values are possible: 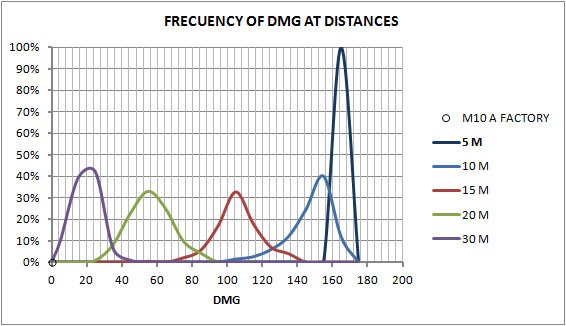 This is a point that many players do not understand: A shot can have 140 damage, but can also have a 70, even with perfect aiming.

This can be seen in the value of the standard deviation of the damage values, although it is not an easy to understand graph: 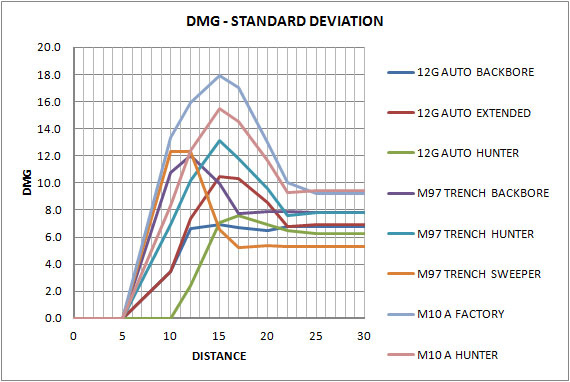 More clear is if we express the probability of damage in this way: 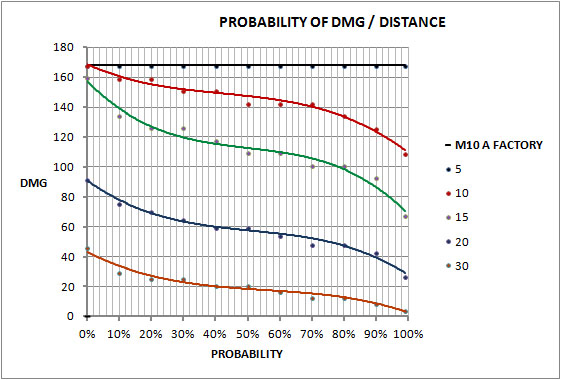 The average damage is just the cross of these curves with the line 50% but these curves only can be given for one weapon (it would be a mess give all curves together). Note that the real values are staggered because with a damage, for instance, 8.4 per pellet we can only get 8.4, 16.8, 25.2 … but not any value.

But a player wants to know if a shot is going to kill or not, because it is assumed that a shotgun has to solve the question with a single shot. If it produces a damage of 140 it is the same as if it produces a damage of 101. This is the probability curve of damage bigger than 100, or what is the same the probability of killing from a single shot. There are no curves of 12G Auto because it no able to kill with a single shot (which kind of shotgun is this supposed to be?). 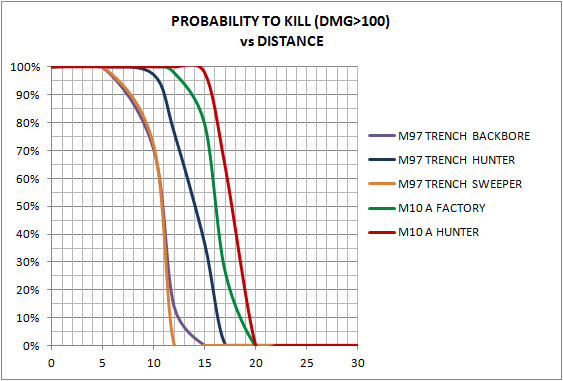 I have also calculated the damage curves when there is a horizontal deflection of the aiming, ie the sensitivity of the mean damage to the deflection in “X” axis: 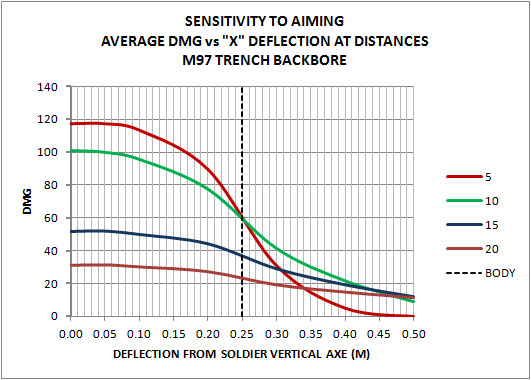 As can be seen with this shotgun at 5 meters the tolerance to deflection is about 17 cm to get an average damage of 100. At 10 m … practically only the centered shots get damage 100. Remember … the shotguns need a to be aimed more accurately than the rest of the weapons, against what most players believe. Seeing most of the circle on the enemy’s body does not guarantee anything.

The variability of the damage at a specific distance and the sensitivity to the aiming are basic to understand the operation of the shotguns.

Conclusion: DICE has broken the logic of BF4 with shotguns. There was: equal damage per pellet, more pellets=more damage but less ROF. Here they vary cone angle, pellet damage and number of pellets at the same time. More difficult to know the behavior of a weapon. That’s why the curves are less structured than there.

leptis ran these calculations before the patch that modified the Model 10-A. While the changes don’t seem that huge on paper, they had some subtle changes…