The introduction of the negative model of spread in game has produced some quick conclusions:

Is this true?. Well, in general…not.

First let’s look at the parameters of spread (ADS) by comparing negative and positive model (this has also had a major change by introducing a new FSM Spread). Many curves are overlapped because versions. 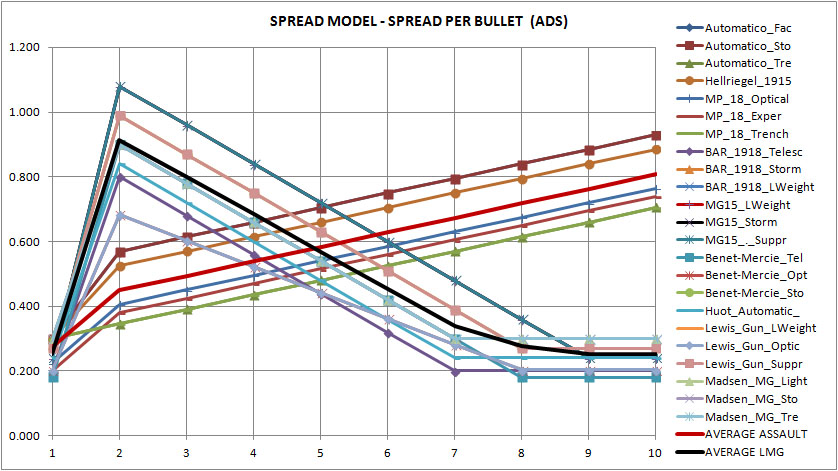 In general, and seeing the average values (red and black lines), the negative model gives worst values of spread up to 5th bullet and reach the minimum value at the 7-9th bullet.

To analyze the geometry of the burst with negative model I have met several graphics of my simulator in a single control panel that is this: The Bursts Analyzer.

Here only geometry of burst is analized. No damage are applied. 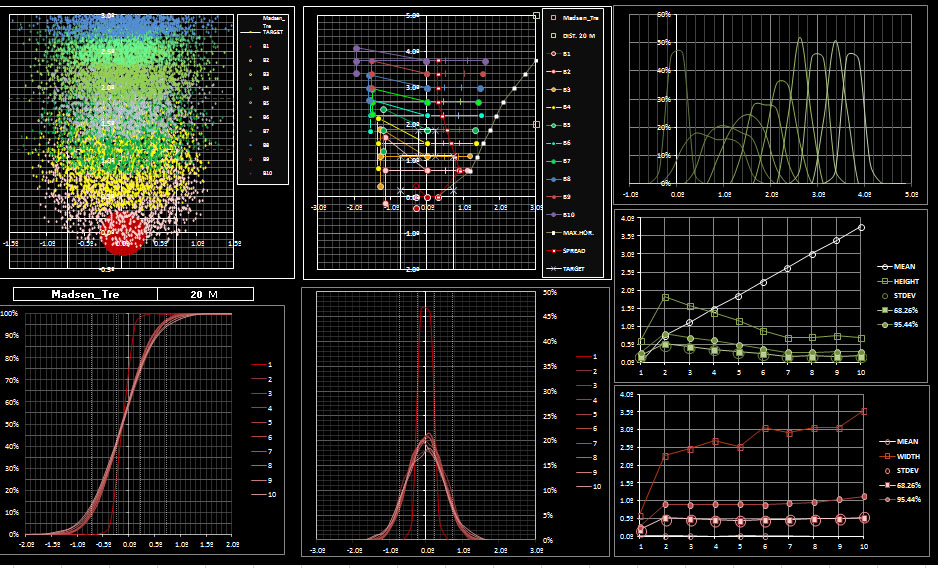 The synthetic burst have to be explained. We have the maximum measured width of the cloud (remember that I simulate 2,000 bursts of 10 rounds): horizontal line; height: vertical line; oblique lines help to visualize the relationship between width and height . Horizontal line has vertical marks enclosing percentiles 68.26% and 95.44% of the bullets, which correspond to one and two times the standard deviation in a Normal distribution. Red vertical curve : spread applied to each bullet (horizontal dimension). An interesting line is gray one white dotted on the right that shows the maximun possible width of the hit clouds. As it is seen there is a gap between the measured width and the maximum extent possible. This indicates that probability of bullets in that gap is less than 0.025% (for 2,000 bursts).

Position, shape and frequency distribution in a burst

Analyzed all LMGs with negative model it is found that the horizontal density of the cloud is very uniform in all bullets within the burst (including the second one) and tends to have a normal distribution from the 2-3th bullet with an effective density almost equal (it improves slightly for low recoil/spread weapons and is constant for more dispersive ones). Note the estability of standard deviation. 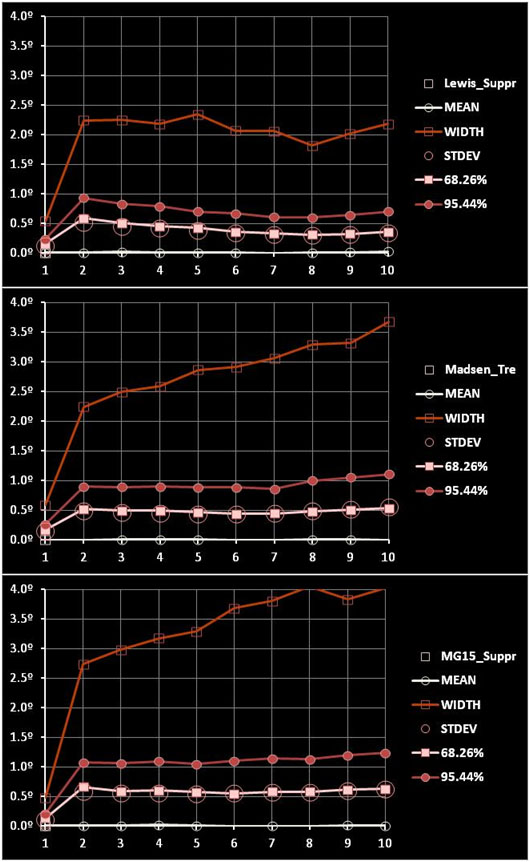 An interesting graph is this, bullets that are in the range of body width at a specific distance (note that it is 50 m):

That is, the maximum number of bullets that you could land in the body with perfect Vertical Recoil control. As you can see for this weapon at those distance the second bullet is worse than other ones, but similar as 9th and following bullets (due to the cumulative effect of the Horizontal Recoil). In other words; with this weapon at those distance it would be best two 7 bullets bursts that one of 14 bullets, opening the discussion of the optimal burst length for each weapon at a distance. Remember that re-start the burst longer than 7-8 bullets doesn’t penalize the spread because you are in the minimum spread value and you have the advantage of a new accurate firts bullet (and surely of re-aiming)

You can see the differences of some weapons:

I can advance that the same happens with microbursts (2-3 bullets). They have a range of validity. In a first approach are valid for highly dispersive LMGs and for all LMGs further a specific distance (shorter the more dispersive the weapon is). Maybe I will post about this.

The general conclusions are that Negative Model:

The quick conclusions in the beginning apply perfectly to Benet-Mercie Storm…no to all LMGs.