In a previous post (Recoil Control: A pattern of control (1, BF4)) a Recoil Control pattern based in one weapon was found, finding that this was done in three domains differentiated: no control, adaptation and stable control. (X always miliseconds and Y always degrees)

Subsequently, more records based on memory reading, from series of controlled bursts (3 or 4 per weapon. 24 bursts in total) of the same player SPECIMEN 0 have been available.

The methodology of analysis has been the same as in the previous post arriving at the following medium bursts, in which the three differentiated domains that had been detected in the previous post are appreciated. We analyze the range from 0 to 1200 milliseconds that covers the definitive range (0-800 milliseconds approx.) in which the 10 bullets to be used in the simulator must be produced. There are other effects in long bursts - 20-30 bullets - (oscillations, loss and recovery of control, fatigue, etc …) that are not analyzed here.

You can see the difference between high and low Recoil weapons and the three phases. In the low recoil weapons control is easier and earlier, and even the control tends to worsen very slightly in the adaptation phase. With high Recoil the control starts after the third bullet (on average) and with low Recoil after the second, and sometimes after the first. Remember that high Recoil corresponds in general with high ROF.

With this we need four parameters to characterize the control:

It has been found that there is a strong correlation between the FSMxRECOIL UP parameter and the previous parameters, which allows to model these parameters for each weapon (and consequently for any level of Recoil):

This allows to simulate recoil control (at the level of SPECIMEN 0) for any weapon. Below you can see the simulation made for two weapons (high and low recoil). The model used is the calculation of the mean level of control from parameters (red dashed line) and simulate the variability by applying an uniform random model between +/- standard deviation which generate the solid gray line, which is different for any simulation. However, we do not need to know the position of the barrel at any the time of the process but only the position in which the barrel will be at the time of each shot being the red dots of the graph (simulated shots which also change in each burst). 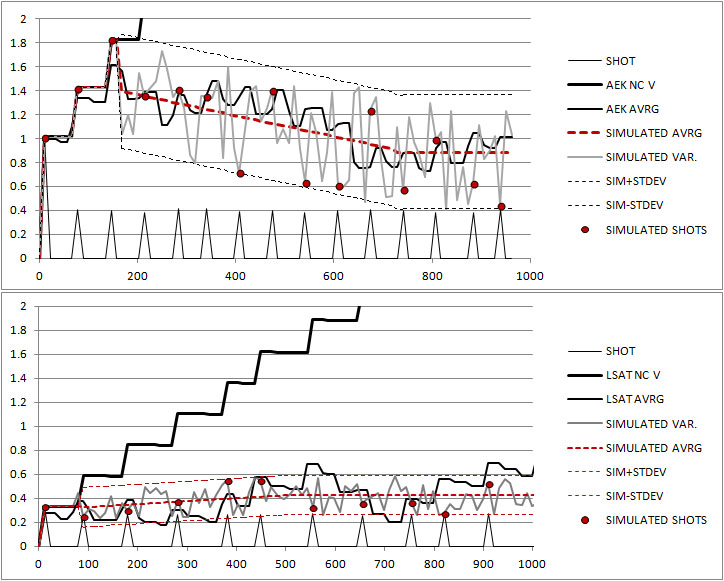 A more complex line of analysis has been found, because the player does not fight against a QUANTITY of Recoil, but against a QUANTITY in a certain TIME, which opens the way for a dynamic analysis in which ROF plays a fundamental role and the speed of adaptation to the stimulus as well. In that line the main questiÃ³n is the angular speed (pitch/milisecond). That is, you can control ANY quantity of recoil, but you need ANY time to do it… and you haven’t this… You can imagine the line.

Conclusion: A model of Vertical Recoil Control has been found to be implemented in the simulator.

Next posts: Control of the Horizontal Recoil to close the question and one of Consequences for Players (without graphs nor standard deviations