The purpose of this post is to make an initial analysis of structure of Recoil Control. Remember that the challenge is to formulate a model to simulate Recoil Control in simulators. But walking the road we will learn something about Recoil Control pattern.

Five bursts have been recorded, one without control and four with recoil controlled, aiming at a recognizable target.

At the moment the results are only valid for this player and this weapon.

What we have is this (only vertical recoil): 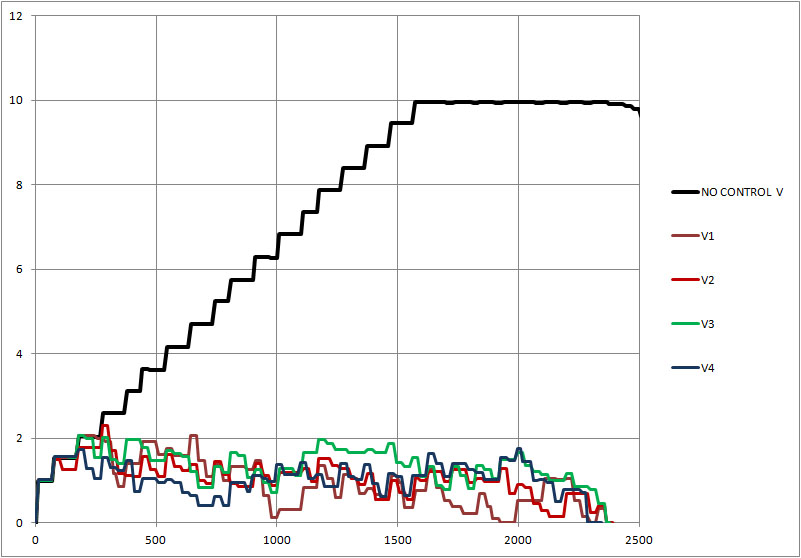 Horizontal axe is always in miliseconds. Note that weapon reachs the maximun Recoil Up.

The bursts in more detail can be seen here with the horizontal recoil included (reference of FSM*RecoilUp and max/min Horizontal Recoils is given): 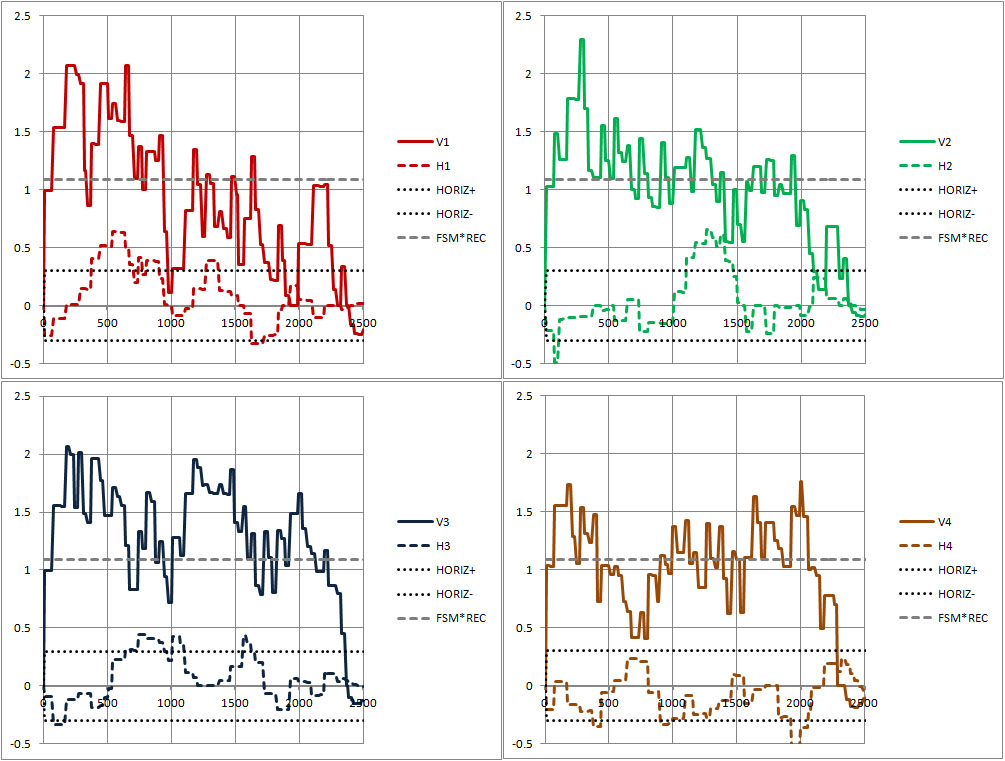 Since we are not going to work (for the moment) with the horizontal recoil, I just want to say that there seems to be a certain correlation between large corrections of horizontal recoil (when it has accumulated excessively) with a great vertical correction.

The values of the first 10 bullets are these: 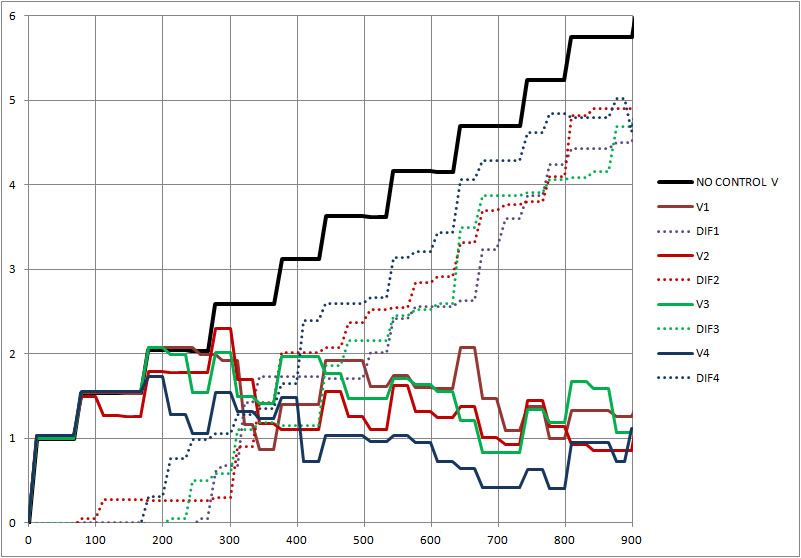 The dotted line is the difference between non-control and control and provides the reaction time after the first shot (not necessarily since the mouse button is pressed because there is a technological delay to the shot).

Some irregularities (time between shots) should be due to sampling and tickrate asynchrony. The small vertical differences are due to the small randomness of Recoil Up (0.95 +/- 0.05).

The average reaction time after firts shot is 195 miliseconds (max=267; min=100). The corrections happen after three bullets in three bursts and after two bullets in one burts.

The corrections (cumulated corrective movement) made between bullets are: 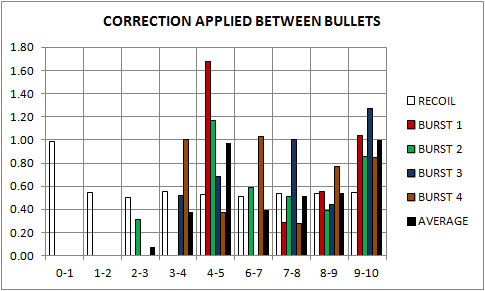 You can see that there are two types of corrections: ones in the range of Recoil Up and others of the order of double that value. My hypothesis is the major may be a joint corrections of recoil up and horizontal recoil (to be confirmed). That is to say a regular rhythm of correction adapted to recoil up and some exceptional for general correction.

The average barrel position in the four bursts can be seen here in the dotted line: 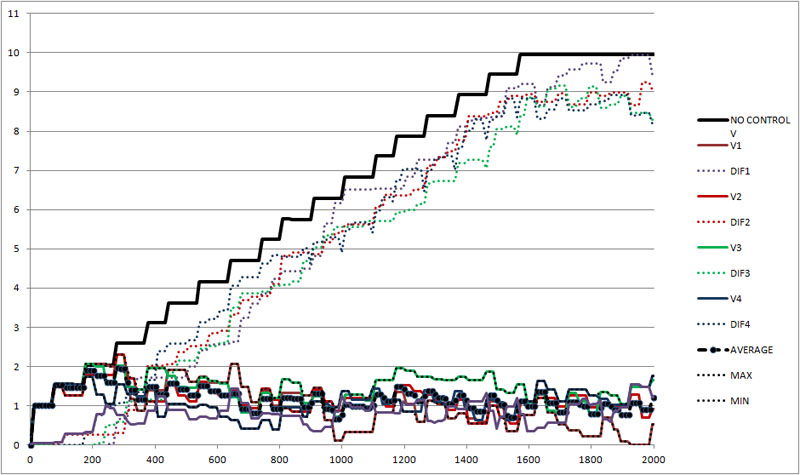 More clearly it is shown in this graph that also includes the span (maximum-minimum) of the positions of the barrel in black line, referred to the axes (not superimposed to the average line).

It can be seen that after the third bullet there is an adaptation and that the average line stabilizes with a height of one degree above the point of aiming +/- 0.8 degrees of span.

This allows to formulate a synthetic model of Recoil Control in three domains: 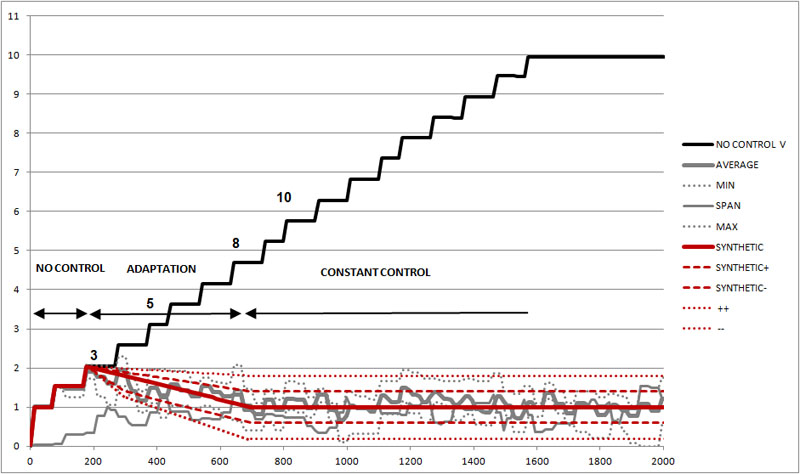 The recoil up can be modeled with…

1.- A deterministic model: The vertical position of barrel follows the solid red line.

2.- A probabilistic method: The barrel has a random vertical position between de firts dotted lines with an uniform distribution.

3.- A more complex model: The barrel has a random possition between the more distant lines (++,–) with a model biased to center.

A small sensitivity analysis will inform if a complex method in the simulation is profitable. For the horizontal recoil we can admit that it is corrected when it exceeds a maximum value that we can set conventionally in the Max Recoil H (firts approach).

The particular conclusiÃ³ns (valids only for this experience and for SPECIMEN 0) are:

1.- The three firts bullets are not corrected.

2.- The aiming stabilizes above the initial aiming point (1 degree)

3.- The circle of accuracy (position of the barrel around the stabilized level) has a size in the range of 0.8 degree.

4.- A initial adaptation (not complete) is made after three bullets and before stabilization.

5.- The repetitive Recoil Up can be controlled with a remaining displacement derivated of the firts bullets uncontrolled.

6.- It seems there are two types of corrections: regular and exceptional (perhaps in combination with a horizontal recoil correction).

Additional: Surprisingly many of the intuitions extracted from the rough method “shoot to the wall” are valid !!!