There is a previous thread analyzing the damage caused by shotguns: Shotgun Damage -outdated- (BF4)

The change in damage model is: 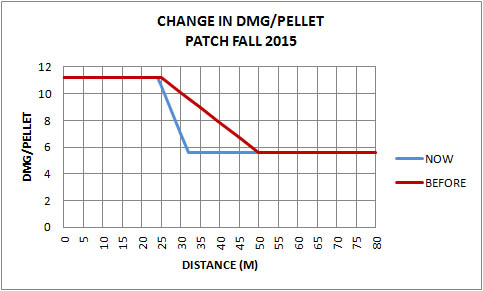 This means that quantitative changes are limited to the range 24-50 m.

The change in the mean damage (number of pellets 12 and 21) are:

As you can see changes are outside the area OHK.

The change in the probability of lethal damage (DMG>100) with one shot, is:

No changes for small number of pellets and a reduction of probability (very small, when previously was 4%, now is 0% - 32 m.) for 21 pellets.

The conclusion is that the shotguns are still effective in its natural range of use (0-25 m), 66% of the engagements according Miffyli kill distance data.

Outside this range, and for shotguns with high number of pellets (ie. 21) the effect (on average) is it will take one shot more to kill, as you can see here: 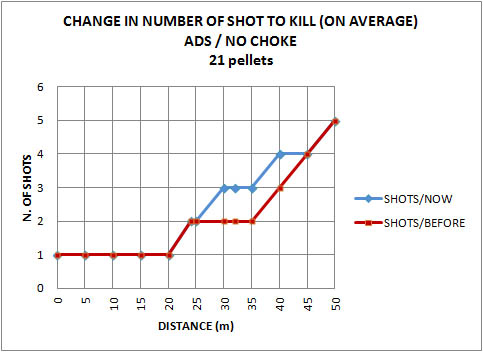 With this change the subjective perception “someone has killed me with one shot at 50 meters” (numerically impossible) will be less frequent. Although if he forgot that was running with 10 of life may continue believing.

Conclusions on the effect of chokes, darts, defensive perk etc., understood as a horizontal displacement of the curves in distance or the reduced area of the body where the full effect occurs remain valid (more or less).