3VN’s BF4 Shooting Mechanics for automatic weapons and for DMRs

I started looking into this to shed some light into how the Stubby / Potato Grip now works in the post Spring-2015 Patch world. As you may have heard by now, using Grips slow down your Spread Recovery. The Stubby, though, also LOWERS your SIPS, so even though you will recover Spread slower, you also have LESS to recover from, in addition to doing slightly MORE damage within the burst. So, which is better? Use Stubby and shoot for longer, or use Naked to recover quicker so you can shoot again?

Then it kinda cascaded from there. Can you use HBar’s SIPS buff to counteract the Ergo / AFG Spread Recovery penalty? What IS the “optimal burst length” now that we know BF4 runs on 30Hz “Frostbite TIme?” Can low-RPM weapons really out-damage high-RPM ones by clicking properly?

I don’t have all the answers, but let’s scratch the surface together!

AFG / Ergo do nothing to affect the damage output of 50m ADS - Not Moving, while slowing your Spread Recovery, so they are purely burdens. However, they are still interesting to look at because you will definitely make use of their other traits in other situations, so you might still choose to equip them, despite their poor showings here.

The same as above can be said for MB. Except for specific low H-Recoil cases it has the worst damage output. However, depending on V-Recoil values you might still need it, and its SIPS penalty is not as bad as the Comp, so you MIGHT be able to recover and start firing faster.

In usual cases, Comp outputs more damage than Naked, not to mention MB, but its SIPS penalty will slow your next burst by quite a bit. In unusual high H-Recoil cases (AEK and MTAR so far) it will out-damage HBar at short burst lengths. In unusual low H-Recoil cases (G36C, usual DMRs) it makes the gun worse than Naked.

HBar lowers SIPS and also halves ADS - Not Moving Spread so it is no surprise that it will out-damage and then allow you to fire the next burst earlier, thus topping the charts. Can you handle the V-Recoil, though?

Naked has no benefit nor drawbacks. Is that enough? 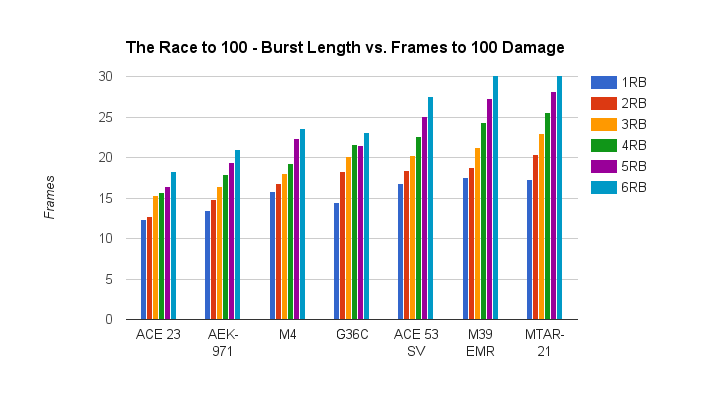 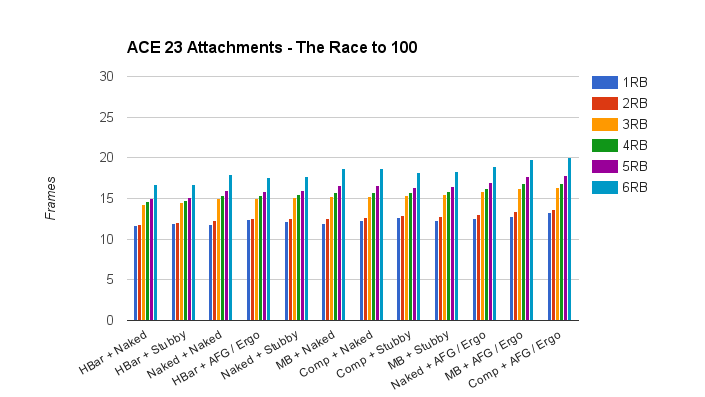 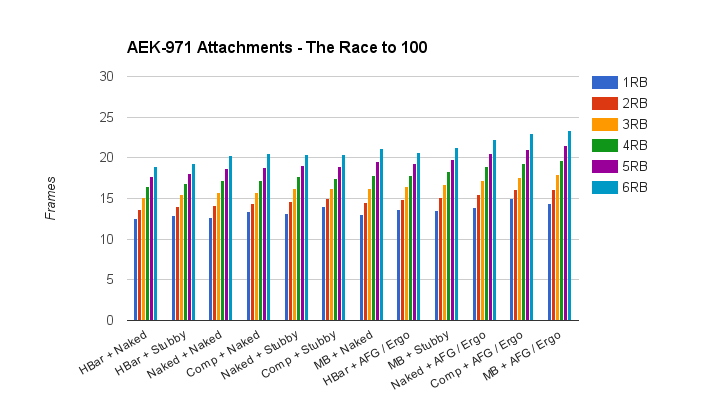 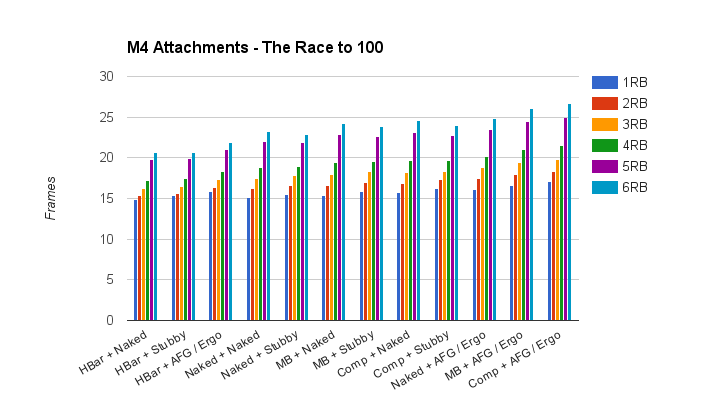 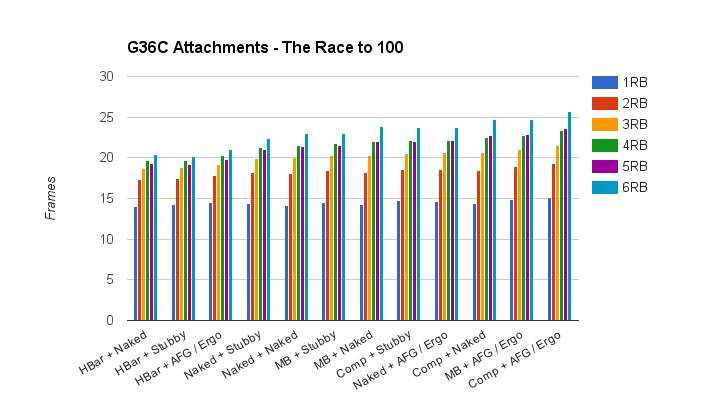 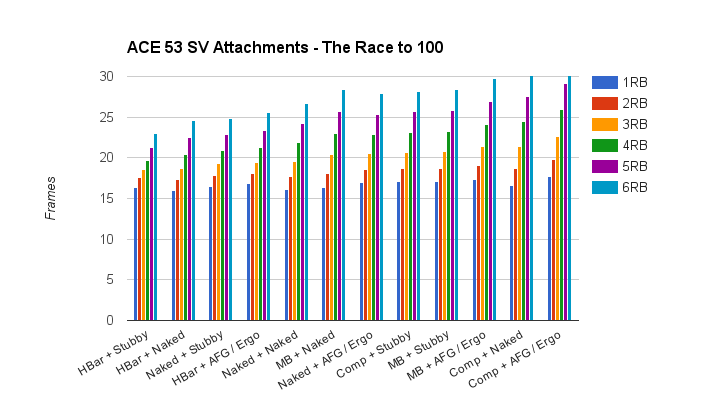 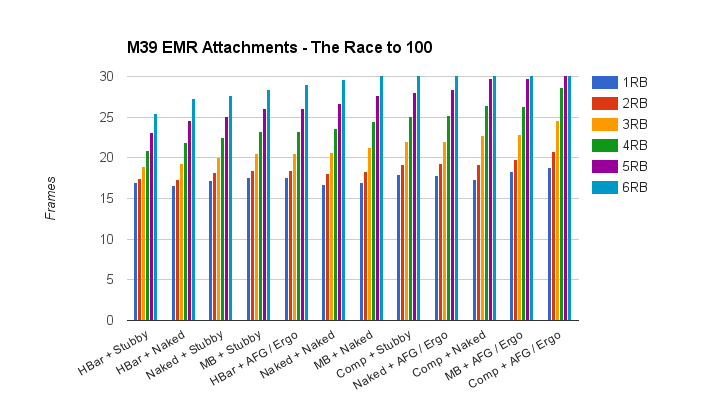 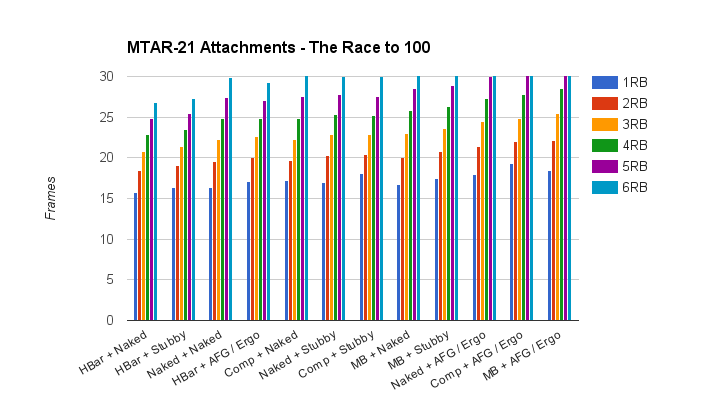 Please note that all decimals are carried on, despite “Frostbite Time” should be discreet 1/30 frames and you can only either fire or not fire within the frame. So, please don’t use the Worksheet as a true “burst length” guide… to truly do so, you probably have to Round Up each frame value in order to fire at true Base Spread. The reason why I carried all the decimals is so minute differences can still be ranked. To Round Up the frame values will result in a lot of the attachment combinations performing the same… as certain weapons turn out to be just as accurate and damaging with Comp as with HBar, while shooting them the same way… which is probably the correct way to look at it going forward.

Can we draw any? I’m not sure about that; this is just a very small sample of weapons available in BF4. Plus, I don’t think I know enough to make any sweeping statements. If pressed, though, I guess I can make some observations…