The analysis of the horizontal recoil control is more complex than the vertical recoil one for two reasons:

1.- The Recoil H has a completely random pattern so it is not possible to compare the No Control pattern with the controlled bursts.

Due to this difficulty the analysis methodology will be different.

We know that in an uncontrolled burst the extreme values are increasing statistically with the number of bullets. 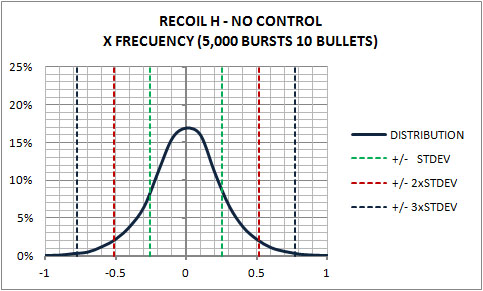 The measured distributions are of the type: 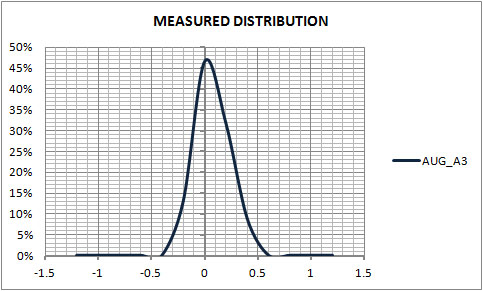 The total span value measured on average is on the order of 64% of expected: So we can say that the SPECIMEN 0 player controls the Horizontal Recoil by 36%. This would be sufficient for a fast simulation by multiplying the parameters by 0.64 for the recoil controlled scenario. In this weapon, (AUG) the value is 67%.

Not all bursts are so regular. Weapons with strong asymmetry and high horizontal recoil provide distributions like this:

Asymmetric and with worse relative control (74%). The irregularity in the peak is due to the small number of bursts measured.

As you see there are very good correlation that permit modelate any weapon.

With that adjustement of simulated recoil H is:

It has been a very hard project, much more than expected due to small number of measured burts. Now to rest for a while reading posts from other authors.